Yes, audio panning is about moving sounds left and right in the stereo field when you produce and mix music.  There's a bit more to it than just that,  as you probably can imagine...

Like basic level balancing, audio panning often gets overlooked in mixing discussions. EQ and compression, as you probably know by now, always tend to take the limelight.

Panning is however an extremely powerful mixing tool. It affects your EQ, your balance and your stereo image. It deserves your careful attention on each and every mix you perform.

Beginner's basics: What is audio panning?

Audio panning is a process in audio and music production which is used to position sounds in the left to right spectrum of a stereo image.  This ability is made possible by a pan pot or slider that allows you to individually adjust the ratio of levels between the left and right output of a stereo audio signal.

In it's most basic sense it can be visualized like the diagram below:

What does panning do in music?

Audio panning creates interest, width and a sense of space in a stereo mix by making sounds or instruments appear to come from different places in the left-right spectrum of the stereo field between two speakers.

Audio panning in a mix:

How you pan can make the difference between a poor, good and great mix because it affects the interplay of sounds or instruments over time. It also affects how solid or loose your mix feels and how wide your mix sounds in stereo. Panning also influences how good your mix sounds when stereo channels are summed and played back in mono.

It's a good idea to do audio panning before you EQ, compress, set levels and apply effects as all these processes will be affected by your panning decisions.

Panning Instruments in a Mix:

A basic rule-of-thumb audio panning method for any instrument or sound in your mix:

If yes for either question...  ...leave dead center and even consider keeping it fully mono.  This is why pop vocals, dance kicks, basses and snares tend to end up in the middle of the mix.  They lead or drive the song so hard center straight down the middle panning makes sense. Equal energy from both speakers at all times.

In more traditional band-style mixing, like rock for example, panning is often used in way that mimics a live show’s sound from either the audience or stage perspective. Kick, bass, snare, vocal center.  Guitars and keys off to the left and right. Overheads spread out nicely. You get the picture. ;-)

Panning choices are of course highly subjective but there is a basic formula of sorts that most modern mixes will adhere to:

Kicks, snares, basses and lead vocals tend to be panned dead center because these are usually elements that you want to appear solid in your mix. You want these elements to hit the listener straight on and it doesn't get more straight on than dead center.

The rest of the elements or instruments is where it gets more subjective and where you can also get more creative with your panning, although there are still some tried and true methods you can use:

Some mixing engineers and producers like to stick to only three pan positions. They set every channel to center, hard left or hard right and nothing in between.

Drums, apart from snare and kick, are usually panned as they would appear on a drum kit, either from the drummers point of view, with the hi-hat and left overhead off to the left and toms and right overheads spread out to the right of the spectrum, or from the audience's point of view with everything switched around. This type of panning isn't as common in EDM, dance or electronic genres as it is in rock and some pop.

Guitars, keys, synths and backing vocals are usually best off-center, either hard left or right or somewhere in between. These elements along with some of your drums and your effects are what you'll use to create width in your mix.

It pays to spend time getting familiar with the different instruments and sounds in your mix and experimenting with different pan relationships because each mix is different and how you pan will play a vital role in the result you get with your final mix. 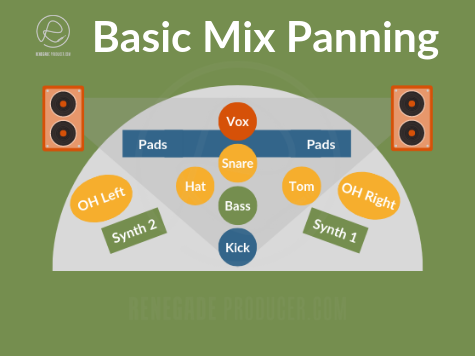 Audio panning can of course be used more creatively with the application of automation and effects like auto-panners which you can start delving into when you get the basics of static panning down.

There are also other applications of panning which come into play when you you design sounds in soft synths or apply widening tricks like the Haas effect.

These applications fall beyond the scope of this basic introduction so for now just get the basics down and delve into more hardcore panning techniques when the time is right.

Read "The Art of Mixing" by David Gibson. It's a bit of an old one, but it remains a great way to help you visualize what you're aiming for when you position sounds during mix down.

What is panning in music production?

Your pan pot, which is short for panoramic potentiometer, allows you to distribute mono or stereo sound sources between your left and right studio monitors.

A pan pot takes the incoming signal and splits it into a left and right channel. It then assigns a dedicated volume control to each channel which allows it to determine individually the amount of signal going to the left and right buses.

This of course translates, in practical mixing terms,  to the ability to change the left to right position that a sound seems to originate from in the stereo image as perceived by your listener.

Some uses for audio panning in music production:

Panning is however used in many more ways in music.  It’s a crucial part of sound design. It can be also be used to create a stereo effect from mono sounds with production techniques which utilize psychoacoustic production tricks like the Precedence (a.k.a. Haas) effect.

How to Level-Up Your Audio Panning Skills:

Spend some time in each mix just to explore different panning combinations. In other words, don’t just settle for your first choice. What happens if you switch the left and right synth parts? How about bringing them both closer to the center? Does the snare work better dead-center or just off-center? Try out different combinations to discover what serves the song best.

Spend time with your pan pot as suggested in point 1 above but move fast and with a bit of aggression when you pan. In other words, try different combinations but don’t fret over minuscule position tweaks and get bogged down, especially at the start of your mix when flow is important for momentum.

You can, for example, in some cases avoid the EQ plugin with just a few simple pan moves.

Two instruments that fight for the same space can be moved to different spaces. Problem solved, no need for EQ!

Audio panning may not always be the best solution for frequency clashes, but it's a good option to consider.

Audio panning affects both EQ and levels so it’s a good idea to start your mix with panning.

Once you have your positions roughly sorted it becomes much easier to set levels and dial in EQ, processing and other effects.

So, make pan a priority!

5. Just a Little Off the Sides

Still on EQ and panning… It’s often good to keep your side image cleaner by leaving your low-end focused in the middle of your stereo field. Pay attention to this when you design your own synth patches too.

Lower octave oscillators tend to work better in mono or closer to center where higher octave sounds can more easily sit further left and right in your mix. Think upside down pyramid:

Mid-side effects and processors can be helpful for getting the image right.

Voxengo MSED is a decent free tool for M/S level and pan control. Modern EQ plugins like Fabfilter, Isotope Ozone and others allow you to EQ only the mids or the sides or both.  This means you can chuck a filter on only the mid or only the side signals and control each individually.

Don’t forget to pan your effects. One tried-and-tested trick is to balance out an instrument or sound in the one speaker with a delay of the same slightly modulated sound in the opposite position.

A hi-hat panned hard-left with a send to a delay of a few milliseconds, say 8ms that’s panned hard right becomes spread out across the entire stereo field. Play around with longer delay times and other instruments too.

LCR (Left-Center-Right) audio panning is a technique where you always pan either left, right or dead center. It hugely simplifies things but may be a bit extreme in some cases.

You could add just a slight bit more complexity to the LCR technique if you panned to a position between left and center and also between right and center. So, that means you always pan to one of five positions: Hard Left, 60% Left, Center, 60% Right and Hard Right.

Your hard-right could be slightly less hard-right at 90%. Same for hard-left.  Make it a softer type of hard-left to see if it helps keeps your mix together better.

Remember, audio panning choices always remain subjective and dependent on the mix you have in front of you.

Pan law, oh pan law! OK, stick with me here... If you wrap your head around pan law you'll understand something fundamental which many producers stay pretty ignorant about. It's important to understand pan law compensation as it affects your final mix in important ways.

Pan law states that, when you have two identical signals, with the exact same phase and amplitude, coming from your left and right speakers at the same time you will perceive an increase of 6dB SPL in the signal level.

The pan law setting in your DAW project setup area allows you to compensate for the above phenomenon. In most cases you'd probably work with pan law set to -3dB or -4.5dB. You will be able to choose other standards such as 0dB which has no compensation or -6dB compensation.

Why would you want to compensate?

The pan law setting you work at becomes important in a few scenarios...

2. When you use panning automation...

You may choose to move a sound from left to right in your stereo field through automation of your pan pot or slider. You will, without any compensation applied, perceive a increase in level as the sound passes through the center pan position. Pan law compensation allows you to keep the level more constant as it journeys left or right in your stereo field during automation.

I will leave the subject there as I think this covers the 20% you need to know when start producing.  This video below will give you a more visual explanation of pan law,  with examples:

Take Massive Action for the Win:

Congratulations,  you’ve stepped up your pan game a wee notch.